Use the science of behavior modification to motivate yourself.

In the classic book, Science and Human Behavior, B. F. Skinner describes the behavioral principles that govern much of human and animal behavior. The premise of the book is that behavior is influenced by the consequence of the behavior.

If a behavior receives a positive reinforcement (for example, you give your dog a treat when he obeys a command) that behavior is more likely to be repeated.  However, if you are punished when engaging in a certain behavior, theoretically, you may be less likely to repeat it.  Research and history have both shown that punishment is largely ineffective in the long-term.  Short-term, it may have some immediate effects, but usually those effects are brief.  The table below depicts the conditions under which behavior is influenced.

Karen Pryor is an animal trainer and has worked with large marine mammals such as dolphins and orcas.  In her book, Don't Shoot the Dog, she discusses the fact that whales do not accept punishment.  If the mammal misses a trick and is given a punishment, the whale will no longer respond to the trainer.

Suppose you want to start an exercise program of some sort. Perhaps you want to walk or jog everyday or want to visit the local gym two to three times per week. You could provide an incentive by giving yourself a reinforcer when you complete a certain number of minutes or miles (walking/jogging) or number of visits to the fitness center.

I am not one of those exercising-loving individuals who runs until the endorphins kick in. However, I recognize the necessity of exercising for better health. To keep myself motivated to walk every day, I decided that I would celebrate each marathon, 26 miles, that I complete. At a rate of three to four miles per day, I am able to walk a marathon every few days. My incentive is $25 to spend at Amazon or iTunes. Now that I am walking consistently, I have changed my reinforcement structure so that I need to walk 50 miles in order to receive the reward.

In previous posts I wrote about my writing project where I wrote 60,000 words in six weeks. I gave myself incentives for completing blocks of words ahead of schedule. This was effective. My initial goal was to write 500 words per day for 120 days. However, by incentivizing my writing, I wanted to write more words per day and try to write regularly.

If you are trying to start a new behavior, think about about how you can provide incentives to help that behavior become a habit. Make a list of reinforcers and when you will earn them.

If you learned something from this post, please check out my free e-book, Never Quit Learning: 10 easy ways knowledge can help you stand out. 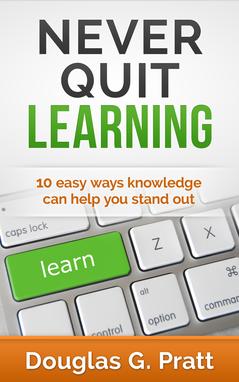