Does spelling make a difference when using a GPS? I once followed directions to a Lego store inside an outlet mall, only to find myself in the middle of the country in a run-down industrial area. Fortunately, the mall was only about 15 miles away. This was an important lesson: don't rely solely on the GPS for navigation.

Below is reprint of an article I first read on Yahoo! news. I transcribed the article into my 2009 notebook because I felt it was an extreme example of what can happen when you make assumptions about technology.

In preparing for this post, I searched for the article, and found it on the website for Reuters.

7-28-2009. Two Swedes expecting the golden beaches of the Italian island of Capri got a shock when tourist officials told them they were 650 km (400 miles) off course in the northern town of Carpi, after mistyping the name in their GPS. 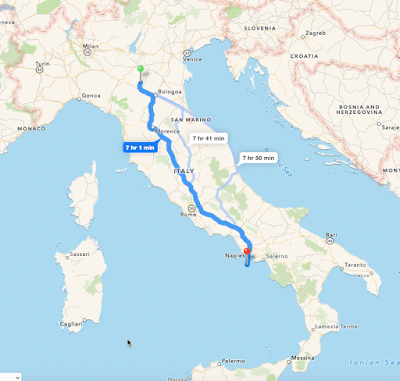 "It's hard to understand how they managed it. I mean, Capri is an island," said Giovanni Medici, a spokesman for Carpi regional government, told Reuters Tuesday. "It's the first time something like this has happened."

The middle-aged couple, who were not identified, only discovered their error when they asked staff in the local tourist office Saturday how to drive to the island's famous "Blue Grotto."

"They were surprised, but not angry," Medici said. "They got back in the car and started driving south."

The picturesque island of Capri, famed as a romantic holiday destination, lies in the Gulf of Naples in southern Italy and has been a resort since Roman times.

Carpi is a busy industrial town in the province of Emilia Romagna, at the other end of Italy.